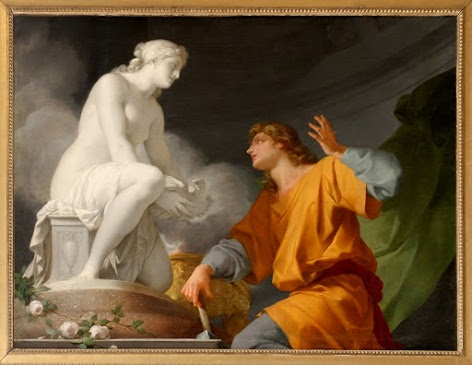 Origin Stories:
The Man in the Moon
Uses a lot of repetition as the blacksmith and the wise man go back and forth
The main character, the blacksmith, is presented as foolish and fickle
The wise man is happy as he is; wisdom=good
Plot twist at the end; the blacksmith must remain the moon even though he is unhappy. He learns to live with it.

Heavenly Beings:
The Eight-Forked Serpent of Koshi
Susanoo=god, strong young man, chivalric, questing hero, warrior
Kind of damsel in distress trope; handsome man saves the girl and marries her
Uses the number 8 repetitively, parallelism, maybe symbolism
The conflict is solved primarily by cleverness, not by a fierce battle between man and monster

Metamorphosis:
Pygmalion
Pygmalion, the protagonist, is morally upstanding, refuses to marry a wicked or immoral woman. However, he’s also a fool for falling in love with a statue, and he’s ashamed of it.
Venus, a goddess, intervenes in the affairs of humans
The statue-woman doesn’t really play much of an active role; I wonder what her side of the story would be.

Tricksters:
Tiger, Brahman, and Jackal
Both the Tiger and the Jackal are tricksters
It’s interesting that the jackal actually helps the brahman; usually one thinks a trickster is selfish
The anthropomorphism of animals; they talk and reason with humans
The Jackal feigns foolishness, but is actually cunning; uses the tiger’s pride against him

Bibliography:
Fleeson, Katherine. The Man in the Moon. Source.
Champney. The Eight-Forked Serpent of Koshi. Source.
Kline, Tony. Pygmalion. Source.
Jacobs, Joseph. The Tiger, the Brahman, and the Jackal. Source.