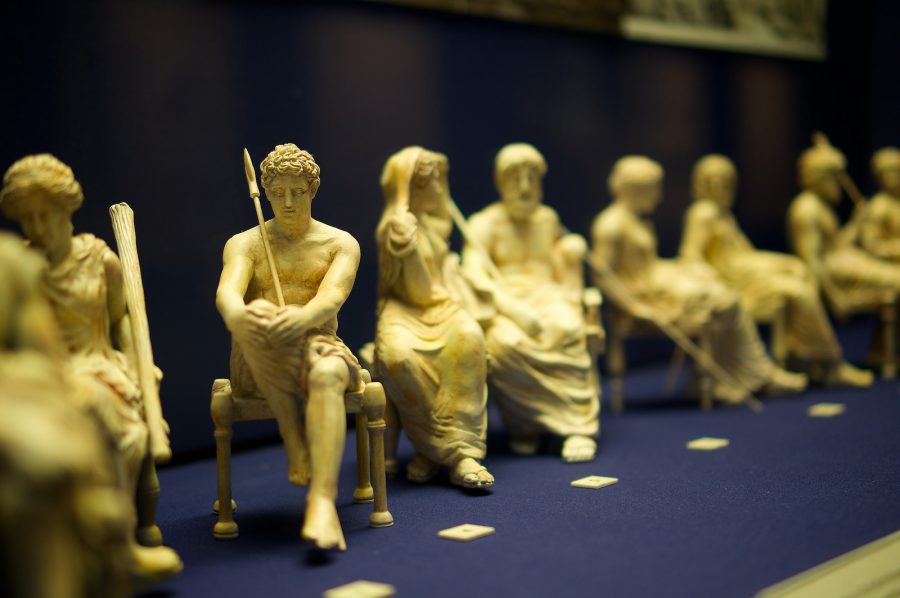 Pantheons are families of deities.
They help us make sense of the world as we know it
They usually help provide an answer to human existence.

Sumer is the earliest known civilization in Mesopotamia.
They worshipped a bunch of gods who were all related to one another.
These deities generally had a sphere of influence or sponsorship, and the entire theme of their mythology was that nature is more powerful that humanity.

Egypt also had a bunch of gods, who were headed by the king of the gods, Ra. Many subsequent pantheons had this kind of ruler.
Egyptian pharaohs notably used the gods to lend credibility to their reigns, saying they were gods reborn on Earth.
The Egyptian gods and their stories revolved around death, such as in the story of Osiris, where he gets mummified and resurrected as the king of the dead.

Dionysus as a foreigner god; That’s an idea that would be interesting to explore; what happens if gods cross cultures?

Aphrodite always cheated on Hephaestus. Hephaestus caught her with Vulcan and embarrassed her in front of everyone.

The stories of the gods parallel the flaws of human families. They mirror human nature.

Hera tries to kill the offspring of Zeus’ affairs.

Heracles has a fatal flaw like all Greek heroes, but instead of hubris (the most common) Heracles’ flaw is wrath/rage. He kills his wife and children and can’t control his strength. This flaw can be seen in how he accidentally kills the first centaur he meets, how he kills Hippolyte, and how he kills the centaur who kidnapped his wife, which ultimately leads to his death.

Changes name to “Heracles” in order to appease Hera; Changing a name often symbolizes a change in a person’s character.

Has to complete 10 labors to atone for the murder of his children and become immortal, but 2 of them get disqualified, leading to the full 12.

Image 1: The Greek gods from the British Museum. Source – Flickr.