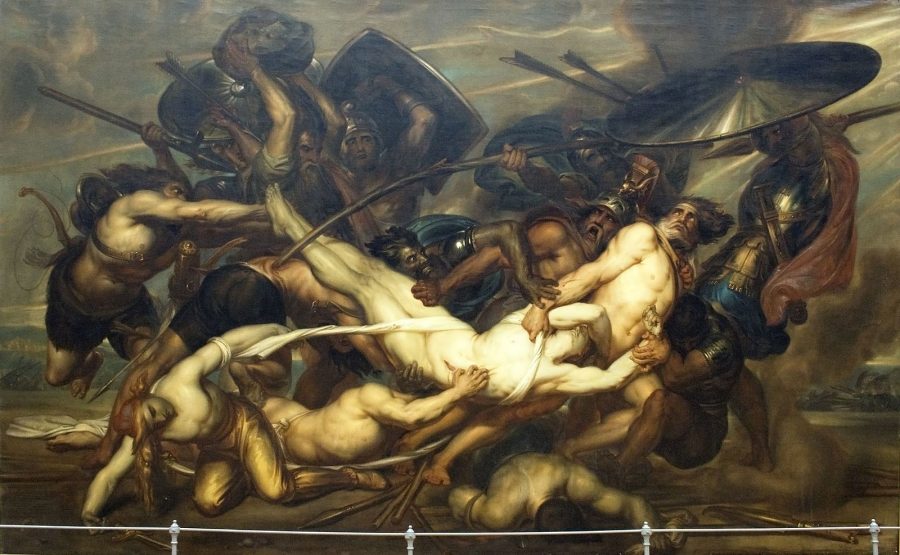 Of How the War with Troy Began:

Helen is often referred to with an epithet “Fair Helen.” I think this is done to reinforce the story detail that she is very pretty.
It’s interesting that the King of Sparta let Helen choose her own husband, but after that, her agency disappears. Why did she choose Menalaus? How did she feel about being kidnapped? Did she do anything about it?

Greek god: Apollo (Wikipedia)
God of music, prophecy, medicine, archery, the sun, etc.
Interferes in the human realm, and seems to care about the priest who worships him.
His death arrows are an interesting plot device. They don’t manifest as literal arrows, but as a plague. What other kinds of special arrows does he have?

Agamemnon is prideful, greedy, and ungrateful. He seems to deserve the scorn Achilles gives him.

Greek goddess: Athena (Wikipedia)
Goddess of wisdom, invention, strategy, and warfare.
She also interferes with the human realm. Why does she favor Achilles?

Achilles talks to Thetis:
Achilles’s plea for help is very well written and compelling. He brings up another old myth about Zeus and the hundred-handed giant.

“Now go to Olympus, to the palace of Zeus. You helped him once in the old time, when the other gods would have put him in chains, fetching the great giant with the hundred hands to sit by his side, so that no one dared to touch him. Remind him of these things, and ask him to help the Trojans, and to make the Greeks flee before them, so that Agamemnon may learn how foolish he has been.”

Achilles to his mother, Thetis

Favorite sentence: “But Achilles sat in his tent and fretted, for there was nothing that he liked so much as the cry of the battle.”
This says a lot about Achilles’s character as a brave and accomplished warrior. It also includes a bit of foreshadowing, maybe, because Thetis told him not to go into battle.

What Thetis Did for Her Son:

I like how the point of view shifts to that of Olympus and the gods as Thetis goes to talk to Zeus.

Mysterious entrance: It’s cool that Hector is introduced without a long sentence about who he is. The reader can deduce that he is an important Trojan who has been out to battle just from the first sentence.

Hector seems to be super pious; maybe that is why Zeus favored the Trojans.

This section does a great job of making me sympathetic to Hector. I think he’s my favorite character. He loves his wife and child, and he values his role as a leader in battle. He seems like a good man, better than the quarreling Greeks.

I like how Paris is described here: “His arms shone brightly in the sun, and he himself went proudly along like a horse that is fresh from his stable, and prances over the grass and tosses his mane.”

The Deeds and Death of Patroclus:

I like the close relationship between Patroclus and Achilles. Patroclus going out in Achilles’s armor is almost like a mini Trojan horse story, except the contents of the armor is far less dangerous than Achilles himself.

I’m really feeling the tension as Achilles asks Zeus to keep Patroclus safe. Especially in this sentence: “So he prayed, and Father Zeus heard his prayer: part he granted, but part he denied.”

Sarpedon vs. Patroclus is a very exciting fight scene, full of strong words and lots of action.

I’ve always loved the heroic tradition of protecting a fallen soldier’s body from the enemy. Here, it’s told very well with the Greeks winning the battle, but the honored warrior being carried away from the fight to his homeland to be buried.

Patroclus’s death is a great example of the common Greek heroic flaw hubris (Wikipedia) which is excessive pride, especially that which defies the gods. Patroclus tries to overcome Troy and Apollo even though it’s not his place, and so Apollo gets him killed.

Image 1: Bust of Helen of Troy by Antonio Canova. Wikipedia.

Image 4: Greeks and Trojans fighting over the corpse of Patroclus by Antione Wiertz. Wikipedia.