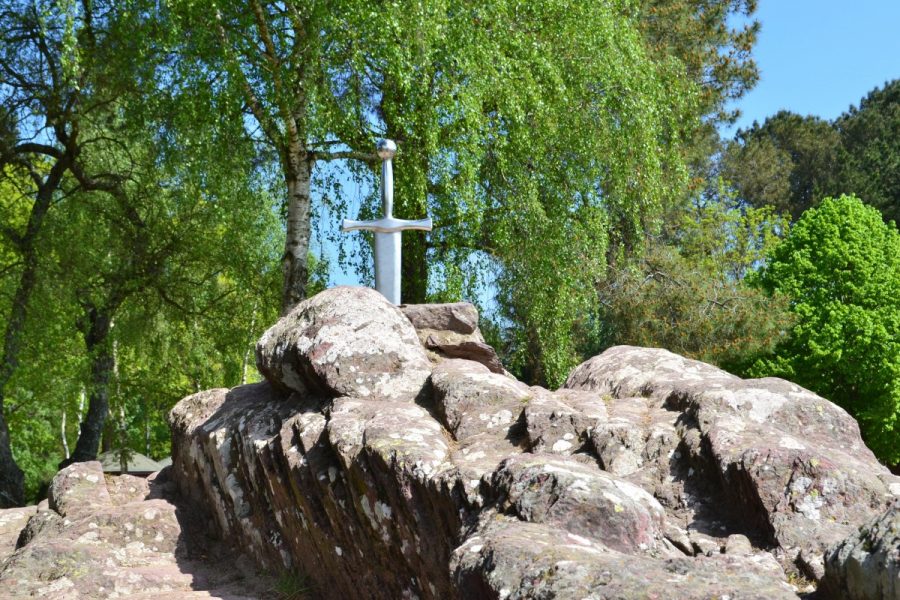 What is the beginning of this text saying about human nature and leadership? I think there’s a lot of “divine right of kings” philosophy in this myth, that a chosen one has to be the leader in order for goodness and chivalry to reign. Still, it’s a very good set up and presents a fallen world for a hero to save.

I love magical, sacred items like the Sword in the Stone. The idea a of a “chosen one” is an old trope, and one that doesn’t really fit into modern philosophies, as we now much prefer stories where anyone, even the low-born nobodies can be heroes.

“Kay shall not be without a sword this day. I will take that sword in the churchyard, and give it to him,” Arthur is a pure hero with such perfect behavior and ideals that it’s almost unbelievable. How would this story be different if Arthur displayed some kind of flaw, like pride or a bit of selfishness?

How would this story be different if Arthur realized what he was doing when he pulled the sword out? I don’t really like that he does it in such a casual, ignorant way. I feel like that could be a really epic moment.

I don’t think I had ever realized that Excalibur and the Sword in the Stone were different swords. That’s so interesting.

“Sir,” answered Merlin, “what you say as to her beauty is true, but, if your heart was not set on her, I could find you another as fair, and of more goodness, than she. But if a man’s heart is once set it is idle to try to turn him.” Yeah, I know the whole Lancelot incident, but every other time I’ve read about Guinevere, she’s been portrayed as perfectly good and wholesome. This is the first time it’s been implied that she might not be a good person, even when she’s young. I kind of like this angle; it makes her a much more interesting character that would be fun to explore.

Sir Tor sounds like a really interesting character since he was born a commoner and then made a knight. I wonder how that affects his actions and relationships with the other knights.

I don’t really like Merlin in this version of the story. He comes across as a controlling old dude and doesn’t seem to be very loving or respectful of Arthur. He almost seems to be scheming, with the way he says things without explaining them.

Morgan le Fay throws the magic scabbard in the lake; I wonder what would happen if someone found it in the future. That could be an interesting spin.

Morgan le Fay reminds me a lot of Loki and other mischief gods and trickster characters. She never seems like a true formidable villain; just a jealous, scheming sister.

The Chapel of St. Augustine can only be found by “adventure.” I like settings like this because it turns travels into Quests. Just like the Lady of the Lake and Excalibur, Arthur has to go on an adventure in order to find what he’s looking for.

It’s definitely interesting that the Holy Grail is seen as a bringer of doom in this story, not a holy and good artifact.

Image 2: A sword-in-the-stone pewter figurine that I got at Norman’s Medieval Fair last year! Source – My photo.