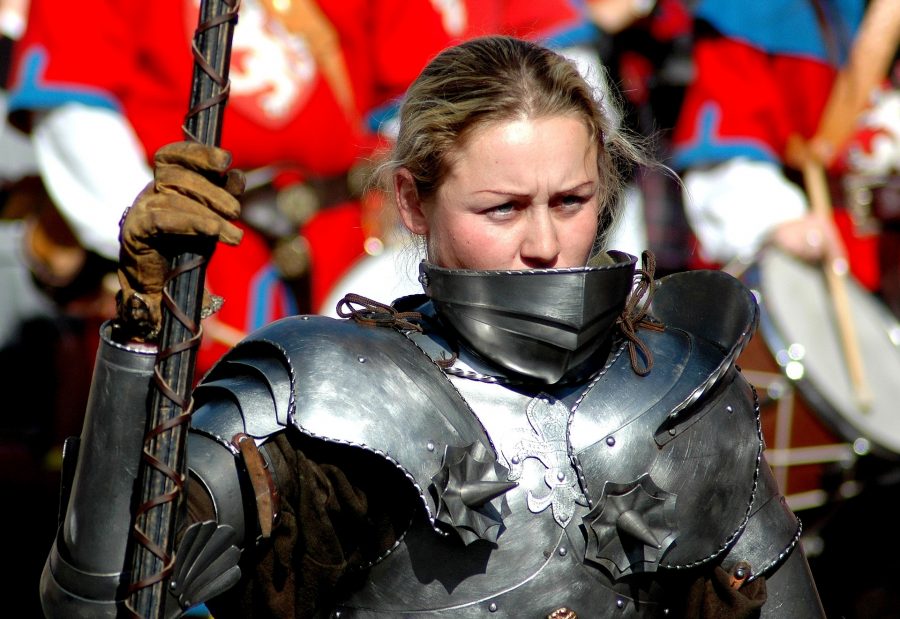 On a fair and sunny day, the lady-knight Susanna went questing into the countryside, searching for someone to share the time with. After riding for many hours, she crossed the river that formed the border of her country; she had never gone so far before.

While she traveled down the narrow forest path, Susanna began to hear loud sniffs and gasps of air. She dismounted her horse and followed the sounds until she discovered a beautiful clearing in the trees. The ground was coated with the softest grass, dappled by splotches of sunlight filtering through the trees. It would have been the most peaceful place Susanna had seen, if it weren’t for the young man sitting in the center of the clearing.

He was sitting cross-legged on the ground, his chest bare. He bore no weapons and had no companions. Even as he saw Susanna enter the clearing, he did not move. He just sat, staring straight forward. His face would have seemed stoic and serious if it weren’t for the tears that dripped from his chin or the way his fingers trembled as they rested on his knees. Every minute, he would draw a great breath to clear his running nose.

“Who are you?” Susanna asked, approaching the man. “And why do you sit here crying?”

“I am the prince of this small country,” he answered. “And I sit here crying because I am about to die. There is a terrible monster that plagues my land, and if it does not feast on rich, royal blood, it will eat my people. It has consumed my father, the king, and my mother, the queen. Not more than three months ago, it took my two older sisters, and its appetite has already returned. Every time it eats someone, it grows a new head, so my problems have only gotten worse! I am the last of my family, and after it eats me, it shall ravage my land and my innocent people. I have failed as a ruler.” The prince’s shoulders slumped as his face filled with shame.

Susanna considered the prince’s plight and decided that she was honor-bound to help in whatever way she could. “You won’t be eaten today, Your Highness. Together, we will vanquish this demon!”

Still, the prince was without hope. “I see that fearsome sword at your side, lady knight, and I do not doubt your skill with it, but even the greatest warrior cannot fight five monsters at once!”

“We will put four to sleep, of course,” Susanna said. “It would not be honorable to silence all five and then kill the thing in its sleep. I shall make it a fair fight: one on one.”

Susanna gave the prince her bow and told him to slay five small creatures and put their blood into five bowls. While he did this, she walked in the forest until she found a stream with a patch of beautiful scarlet flowers growing at its edge. She returned to the clearing with an armful of the flowers. She ground them up with a stone and mixed them into four of the five bowls of blood the prince had prepared, leaving one untainted. Once she had done this, Susanna explained the plan to the prince, who then returned to his place in the center of the clearing, this time with five bowls of blood in front of him and no tears on his face. Susanna took her horse and hid in the darkest patch of trees.

It was not long before the monster appeared in its terrible glory. Each of its five ugly heads sat at the end of a long, muscular neck attached to a dragon’s sinewy body. It lumbered into the clearing, and the five heads converged toward the prince.

“Wait, Great Dragon,” the prince cried as the five mouths opened to reveal five hundred sword-sharp teeth. “I know how hungry you must be, so I prepared these bowls of animal blood as an appetizer.”

The dragon considered this request by sniffing the five bowls. Satisfied, each of the five heads lapped up a portion of the blood.

Susanna had prepared each bowl with five times the strength that would be used for the flower concoction’s normal purpose: putting soldiers to sleep after particularly painful wounds. Thus, almost as soon as they swallowed the drink, four monster heads began to droop. The fifth, which had drunk the untreated blood, looked at the sleepy heads in confusion. Within a minute, four of the heads were snoring on the ground, and only the one was still held aloft, growling at the prince.

This was Susanna’s cue. With a mighty roar, she charged from her hiding place and swung her sword at the creature’s thick neck. She dodged the monster’s head as it lunged back, but with most of the beast unconscious, the fight was quick. It took only five slashes to decapitate the monster’s head. Her honor-battle completed, Susanna went to each of the four remaining heads and lopped them off. Finally, the monster was truly dead.

While the prince lavished his thanks onto Susanna, each of the dragon’s heads began to glow and dissolve. Suddenly, where five horrifying heads had been, there were five people! The first two, a man and a woman, wore gleaming crowns, and the second two, both young women, wore fine diadems.

“Mother! Father! Sisters!” the prince cried, and he ran to embrace his family. The fifth person, an old man, rubbed his head and explained to Susanna that he was a magician who had messed with the wrong spell and become the monster that had tormented the land.

Susanna escorted the prince and his family back to their castle, where the people rejoiced in seeing their good rulers returned. The lady-knight remained in that country for many days with her new friends, until the questing spirit sent her toward her next adventure.

Author’s Note:
This story is based off of Susanoo and the Serpent of Koshi. In the original, I noticed that it followed a damsel-in-distress trope, which, while classic, is not the most inspirational of story structures. I also noticed how easy it was to turn the name Susanoo into Susanna, and I love stories about lady knights, so that’s what it became! I liked how the conflict in the original story was solved by cleverness, but I also felt like it was kind of cheating for Susanoo to just kill the monster in its sleep. Because of that, I decided to include at least one small fight in my version. I was also inspired by the metamorphosis idea present in the anthology, and I wanted my story to have a happy ending, so I had the prince’s family come back in the end. This also made a great way to explain why the monster had so many heads!

Original Source: “The Eight-Forked Serpent of Koshi” from Romance of Old Japan, Part I: Mythology and Legend by E. W. Champney and F. Champney. Web source.

Image: Woman in armor at a tournament. Source – Pixabay