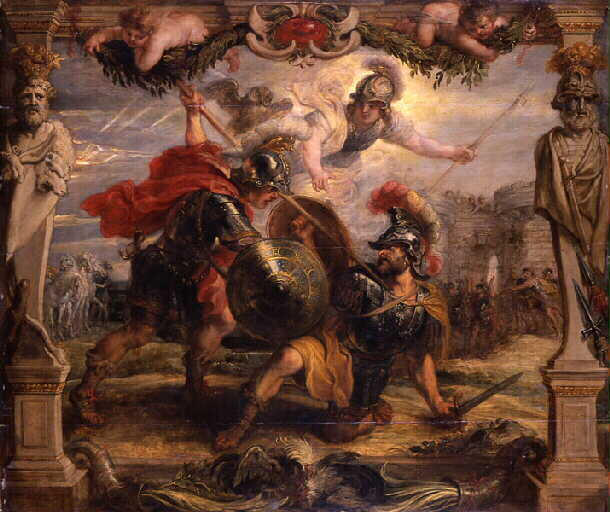 Week 3 Story: The Ballad of Hector

Alas! Woe to Prince Hector,
Honored Trojan warrior,
Cursed by the gods to be a pawn
To fight and die despite his brawn.
In Olympus, cruel Athena grinned
As Hector awaited the fight to begin.
Andromache and Priam in Troy cried
And immortal Apollo seethed inside.
Because their champion would fall
To the best Greek warrior of them all.
Across the field, Achilles came,
That vengeful, warrior, eyes aflame,
His brand new armor gleaming gold
Forged and hammered by the crippled-god.
Alas, Hector! Woe to Troy!

Before the gates of Troy, honorable Hector waited;.
Sure-footed Achilles prowled toward the foe he hated.
If only the prince had not slain dear Patroclus.
Though the fault belonged to that young Greek’s hubris.
It was Apollo’s hand that sent him to death.
Yet Hector would pay with his final breath

Before Achilles could start the fight,
Poor Hector was overcome by fright.
He fled his death with fast feet
But Achilles’s were even more fleet.
Thrice they ran ’round the walls of Troy
Following the paths Hector ran when he was boy.
Hector’s flight was futile as Achilles pursued.
His god-blessed speed Hector could not elude.

Finally Hector, too young, accepted his fate.
He came to a stop outside Troy’s gate.
He decided to stand to retain his honor
To fight for his city, his son, his father.
Hector turned to face his Greek enemy,
Who would have been friend but for Paris’ folly.
With great strength of arm, he hurled his spear,
And the Trojans at the wall let out a cheer.
His aim was true, and Achilles would have been killed
But his god-wrought plate was made with great skill.
It turned the iron tip aside, and unharmed Achilles began to draw near.
Curse the intervention of the gods and that magical gear!
Yesterday Hector and the Trojans were favored by Zeus.
Now he sides with the Greeks, and there’s no hope for a truce.

Unlucky Hector of Troy cried out across the plain,
And everyone heard the prince’s last strain.
Priam of the Trojans and the Greek kings
Were moved and quaked in their very heartstrings:
“Woe to me, Hector, defeated and cursed!
If only the days could still be reversed.
Today I shall die, my life taken for a mistake
Caused by a god’s dishonorable prank.
Let no one remember that I ran from my doom
But that I went with courage to my tomb!
Let the legends tell of the poor Hector’s fall,
And of mighty Troy, greatest city of all!”
Then he let loose a dreadful roar
That shook Mount Olympus to its core.
Hector charged Achilles with sword-arm raised
Like the talon of a diving hawk, the blade blazed.
The prince fought with keenness and zeal
But Achilles met him steel for steel.
The Greek was bolstered by god-strength and magic,
Making Hector’s mortal strength pale and tragic.

For hours through the day, the matched men sparred,
Neither finding holes in the other’s guard.
Even the gods on Olympus high
Respected brave Hector, doomed to die.
Finally Achilles overcame his cursed foe
Stabbing Hector’s soft neck with a cheap blow.
For the prince’s armor once belonged to him
And the Greek knew its flaw where shoulder met limb.
The plate had been bent by a hammer’s strike
Leaving a gap wide enough to wedge in a spike

Hector sunk to his knees, life-blood gushing.
He spoke quickly, as he could see the boatman rushing.
“Strong Achilles, I beg you with my last breath,
Give my body to my father upon my death.
Tomorrow or the next day the Greeks shall prevail,
So let my funeral be Troy’s final farewell.
For today I have fought with true honor and valor.
Even the gods who have cursed me mourn my pallor.”
And Achilles replied, heart hardened by grief,
For young Patroclus, taken as by a thief,
“You are no better than a fatted swine
And deserve no honored funeral shrine.
Priam shall have no ransom for you.
I’d rather give your body to the dogs to chew.”

And, filled with prophecy in his final minute,
Hector spoke with the last of his spirit.
“With those words you have sealed your fate.
You may have returned from this war rich and great,
But to your enemies you are merciless.
This war shall end, but with your death.
Yes, Troy’s sponsor Apollo will have his revenge.
As you kill me for Patroclus, my Paris will avenge.
The fickle gods will finally turn on you,
And despise your strength, there’s naught you can do.”
And with these words, Prince Hector died
And his soul departed for its last boat ride.
Alas for poor Hector, great prince, great man!
Mourn for him, and curse the gods’ cruel plan.
May Troy live on in this weary tome,
That fallen city, the mother of Rome.

Author’s Note:
This story is based on a specific episode from Homer’s The Illiad in which Achilles, the Greek hero, kills the Trojan prince and commander, Hector. The Illiad, in short, is about the Trojan War, which was started because Paris of Troy kidnapped (or ran off with) Helen, who was the wife of a Greek king. Thus, the Greeks attack Troy with every intention of burning it to the ground. Achilles is, generally, the protagonist of The Illiad, but I was particularly taken with his rival, Prince Hector, who seemed to be to be the better man and undeserving of his fate. In the original text, the reader sees that Hector is a great leader, a loving husband and father, and an honorable man. On the other hand, Achilles seems prone to anger and pride. Unfortunately, Hector kills Patroclus, who is Achilles’ most dear friend. This is somewhat of a mistake because Patroclus was dressed in the armor of Achilles, and then Apollo hurt Patroclus so he could be killed. However, Achilles does not see it as such and vows to kill Hector for the murder. At this point, Zeus, who has been favoring Troy, decides to let Achilles kill Hector, which is why in my story, Hector feels so betrayed by the gods. I did not change the story very much, aside from removing a few details and adding others, but I wanted to try relaying the story as an epic poem, which is what The Illiad was written as, though we often retell it in prose. I really enjoyed writing it like this because it was a different challenge than writing prose, and I feel it does a good job of capturing the tragedy of Hector’s death. I learned that the traditional meter of epic poems, dactylic hexameter, does not work well in English. Therefore, I wrote it in heroic couplets, which much Greek and Roman epic poetry is translated to for English-speaking audiences. It was fun working with this rhyming dictionary website (Rhyme Zone) to work the story into rhyme!

“The Slaying of Hector” from The Illiad retold by Alfred J. Church. Web source.