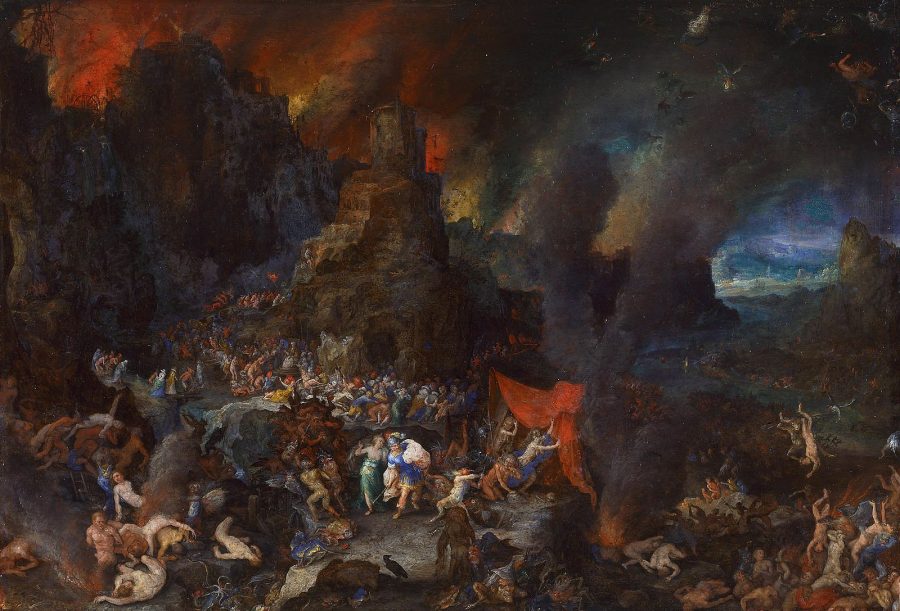 Cape Taenarus wasn’t special. I could barely see the flagged turrets of Aegean Sparta behind the rolling cliffs. The salty air stung my nose as I clambered to the top of the highest bluff—you would think to get to the underworld, you’d have to go down—and I paused a moment to collect myself.

The bluff rose above the ocean, making a looming cliff. I gazed at the white-capped waves. How many a heartbroken lover had thrown herself onto the rocks? My heart weighed heavy as I opened my bag and counted my items: two golden coins, two honey-cakes, and Venus’ empty jar.

It did not take me long to find the Crag of Dis. I merely had to follow the cold wind and moans groaning from it. As I drew near, even the sky darkened in mourning, and the scents mold and rot filled the air. I drew my cloak around me before descending into the fissure. In front of me, I saw the fires of Pluto’s palace, but behind me, the shadow was solid as rock.

The River Styx rumbled ahead, and I found my first obstacle. At a bend in the road, an old man hunched over as he collected sticks. I clenched my teeth and sped up.

“Young lady? Could you spare a coin?” The man’s aged voice was kind as he called to me, but I swept past him without a glance, as the tower spirit had commanded me.

The peal of a bell broke the air, and I heard a voice cry, “Last call!” I dashed forward until I came to a river, where a boat full of moaning people waited. The boat driver, a tall man with a gaunt face and hollow eye sockets held out a hand. Swallowing my disgust, I handed Charon a golden coin and squeezed onto the boat. It was impossible not to touch the cold spirits around me, despite how their clammy, incorporeal skin made bile rise in my throat. I squeezed my eyes shut and imagined my lover, dear Cupid. I would win him back, no matter the discomfort.

I shut my eyes for the entire ride. Once we reached the far bank, I scrambled from the boat and followed the path. Finally, I came to the black marble steps of Pluto’s palace, but on the lowest stoop, a young girl sat, tears in her eyes. “Please, ma’am. I am so hungry. Do you have any food?” My heart ached for the child, dead and alone in this dismal place, but I knew this was a trick from my enemy. I looked away and began up the stairs.

The doors to the palace were open, but the three-headed Cerberus stood before them. Upon sight of me, the beast barked thunderously. Wincing, I reached into my bag and withdrew a honey-cake. Suddenly, Cerberus sat, his three tongues lolling. I smiled and tossed the honey-cake away from the door, and Cerberus chased, each head competing for the prize. “Good boy,” I said before striding into the hall.

A beautiful woman with cunning eyes met me in the foyer. “Welcome,” she said, “come eat.” She gestured to a table covered with food. My stomach grumbled at the smell of the roasted meats, but I knew this was Proserpine, the goddess of the underworld.

I knelt on the cool tile. “Great goddess, I am not worthy to eat at your table, though I do not insult your gracious hospitality. Instead, give me a crust of bread.”

Proserpine smiled, and the feast disappeared, replaced by a loaf of brown bread. She handed it to me, and I took a bite. Wonderful tastes filled my mouth, more satisfying than any meal of meat. Strength returned to my limbs.

“You have a favor to ask?” Proserpine prompted as I savored my crust. I hurried to offer the empty jar.

“Venus separated me from my lover, Cupid, and punishes me with horrible tasks. Please, fill this jar with beauty so I may give it to her and win back my love,” I begged.

Proserpine smirked as she took the jar from my hand. “Venus is no friend of mine. I’ll fill this jar so you may see Cupid again.” In an instant, the jar filled with blue light. “Only Venus may open this,” she warned, “else your mission be for nothing.” I nodded my understanding and turned to leave.

At the door, Cerberus barked again, so I threw the second cake. Strengthened by Proserpine’s bread and the excitement of seeing Cupid again, I began to run. I handed my second coin to Charon, this time the only one on the ferry. At the far bank, I dashed away. I sprinted until I could see the stars through the chasm above me. I stopped. Soon, I would meet Venus. I would prove my worthiness, and then Cupid would be returned to me. I became aware of my tangled hair and tattered clothes. How my beloved would laugh at me in this state! I fingered the jar in my pack. I could use a little beauty to clean myself up; Venus had enough already. With this rationalization, I unscrewed the lid. The blue light escaped from the vessel and consumed me. As it flooded my nose, my eyes, my mouth, I was overcome with weariness. I collapsed to the ground, eyelids heavy. Proserpine had played a trick on Venus! Then, I fell into the vice-like arms of Stygian sleep.

This story is an episode from Cupid and Psyche that doesn’t get much attention in the text. Venus has kept Psyche, a mortal, from seeing her lover, Cupid, who is Venus’ son. Psyche has to perform a number of impossible tasks to prove to Venus that she’s worthy of Cupid. In the story, Psyche is kind of a waif, and other animals and spirits help her complete the tasks. I wanted my version to give Psyche more drive, so I wrote it in the first-person point of view, and I fleshed out the most exciting of the tasks: the descent into the underworld.

Image 1: Aeneas and Sibyl in the Underworld. Source – Wikipedia.