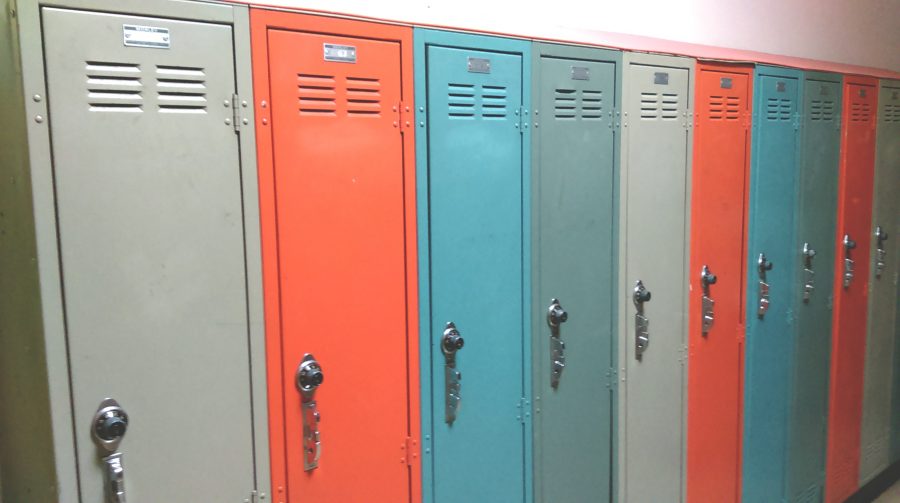 “I loved that movie!” I said to Cooper in the hallway. He looked exhausted and had a coffee in his hand because last night we had gone to the midnight premiere of Desert Saga, a new fantasy movie set in Arabia.

As the bell rang for first period, Cooper stood from where he lounged against the wall, and we walked to Mr. Vizir’s English class. I patted Coop’s service dog, Oliver, on the head. Cooper had epilepsy, so he had Oliver, a golden retriever who was trained to alert and respond to seizures.

“I feel like I’ve forgotten something,” Cooper said as we turned into the classroom. I was about to echo his thought when it hit me. In the room, our classmates shuffled through flash cards, scanned over books, and gave off a palpable air of stress. We had an exam today, and Cooper and I had forgotten about it.

Coop and I nervously took our seats at the far side of the classroom, and Oliver curled up under Cooper’s desk.

“Good morning, class,” Mr. Vizir said cheerfully as the tardy bell rang. He was a kind teacher who loved interacting with students. “How is everyone? And you, Ollie?” He winked at Oliver, who raised his shaggy head at the attention.

The rest of the class grumbled as they put away their study materials, and I feverishly wracked my mind for facts about Frankenstein. Mr. Vizir walked toward his desk, getting dangerously close to a stack of papers: the test.

Our English teacher loved wild stories, so he stopped and said, “Yes, Cooper?”

And so, Cooper attempted to pull off the most daring filibuster any of us had ever witnessed:

Yesterday, I was at my job at Jinn’s. It’s almost Halloween, you know, so I was putting out costumes. This man and his young daughter came over and were looking at the costumes, and of course, the little girl noticed Oliver.

“Daddy, look at the doggie!” she cried. She stretched out her hands, but her dad caught her by the back of her jacket.

“No, Allie, that’s a service dog. See his vest? You can’t pet service dogs because it distracts them from their job,” he said.

The girl looked sad, so I said, “He’s right, and you should always ask before petting anybody’s dog. But Oliver’s not busy right now, so you can pet him.”

While Allie was petting Oliver, the man asked me, “When did you get your service dog?” So, I told him the story of how I got Oliver:

You probably won’t believe it, but Oliver is my brother. He’s older than me, and it’s almost the anniversary of him becoming a dog. One Halloween, he was supposed to take me Trick-or-Treating.

We were walking around, going to houses, when some of Oliver’s friends found us. “Ditch your brother,” they said. “We found a super scary shed out in the woods.” Oliver ran off with them, leaving me alone. I was really young, and I didn’t know the way home, so I just walked into the woods where Oliver had gone. I realized I was lost, and I started crying. A woman found me, and I told her my brother had left me.

“Poor thing,” she said. “Let’s find your home.” She took me to her house, which was a cabin in the forest. When we arrived, she said, “Let me tell you a story about my sister.”

We raised chickens when we were young. My job was to feed them every morning and collect any eggs they laid, and my sister’s job was to feed them at night and make sure the coop was locked. One day, a fox came and saw our chickens. He wanted to eat them, but he saw how well my sister and I took care of them and knew he would have to play a trick. He turned into a human boy and came to my sister as she was locking the coop one evening.

He said, “Do you want to see my meteorite?”

“My mom says I can’t go off with strangers,” my sister responded.

The fox-boy looked shocked. “Not even for a meteorite? It fell out of the sky ten minutes ago! It’s beautiful and shiny, and if you don’t go see it now, a grown-up will take it away!”

My sister loved shiny things, so she followed the boy to a field, where they found a large rock.

“That’s no meteorite!” my sister said, looking at the perfectly normal rock.

The fox-boy feigned glumness. “Oh no! It must have cooled off already, so it’s not pretty anymore. Who would have thought that space-rocks would just be normal rocks?”

My sister was smart, and she knew the rock had never been a meteorite, but she hadn’t guessed the boy’s trick. She stomped home, but she was so upset about the incident that she forgot to lock the chicken coop. The next day, all of our chickens had been eaten!

Then we heard boyish giggles and whispers outside. Sure enough, it was my brother Oliver and his friends sneaking around the old shack.

“How could you leave your little brother all alone on Halloween?” the woman said when she saw Oliver. “Maybe this will make you more loyal.” Suddenly my brother was gone, replaced by a golden retriever puppy. I took him home and told my parents what had happened, but they couldn’t do anything about it. So we had Oliver trained to be a seizure dog, and that’s why he’s with me all the time.

After I finished my story, the man seemed unsurprised, and he said, “I thought I noticed something human about your dog.” His daughter picked out a costume, and before they left, the man gave me a coin. I tried to tell him that I can’t take tips, but he told me it was for changing Oliver back into a human! I would take it out now and show you, but I need to get a new seizure dog first.

We held our breath as Cooper finished his series of tales and Mr. Vizir said, “That does sound exciting, Coop.” His eyes flicked to the clock and sighed. A heartbeat later, the second period bell rang across the school. The entire class erupted in a cheer. “And you’ve talked yourself out of an exam. We’ll try again on Monday!”

Author’s Note: This week I read excerpts from Arabian Nights, which is a frame story like the one I’ve written here. The general premise is that a sultan takes a new wife every night and kills her in the morning. One day Scheherazade, the vizir’s daughter, decides to put an end to this and volunteers to marry the sultan. Every night, she tells part of a story. The sultan wants to hear the rest of the story, so he spares her life day by day. However, because the stories are nested within other stories, Scheherazade never really finishes the original story, which saves her from the terrible fate. I wrote this as a lighter-hearted version of Scheherazade’s procrastination because many students can relate to trying to distract a teacher to avoid a quiz.

There are white spaces where the story changes levels. We begin in Level 1, where the protagonist and Cooper go to class. Then, Cooper start Level 2, where he talks about the man and girl in the store. Then, Level 3 is Cooper’s story about how he got Oliver. Level 4 is the woman’s tale about her sister. From there, the levels ascend until we’re back in the classroom.

The Arabian Nights stories also feature a lot of casual magic and times where humans are changed into animals as a kind of punishment. I threw in several allusions to Arabian Nights, too, in the names of characters and the movie.