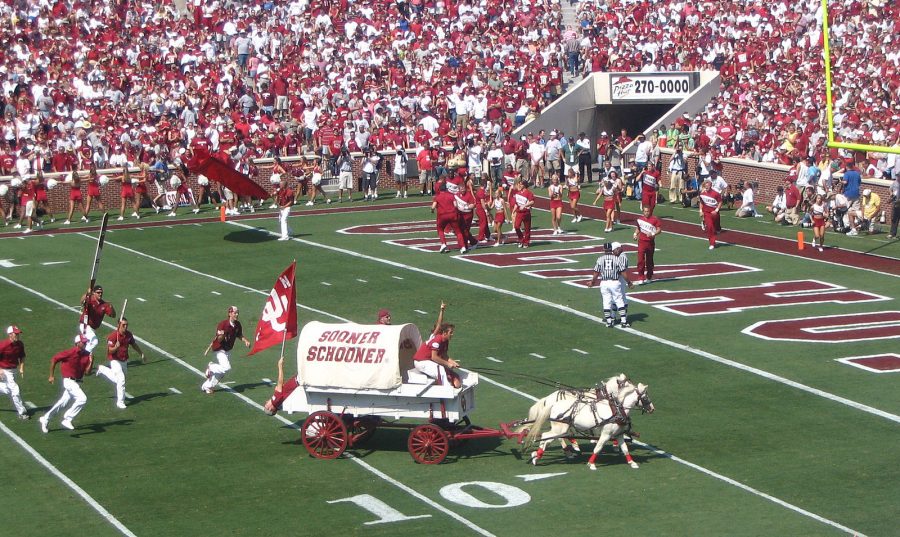 One day, a strong, young pioneer man fell in love with a wise and beautiful princess. He wanted to marry her, but, though she loved him in return, she would not marry him until he proved he was worthy by obtaining the Golden Hat, a mythical relic that would bring glory to whoever wore it.

So, the pioneer, determined to find the hat and prove his devotion to the princess, tied his two white ponies to his covered wagon and set off into the prairie.

He traveled south through grasslands and rolling hills. Sometimes, the wind howled and battered the wagon fearsomely, but his ponies were loyal and hardy and scarcely slowed at the obstacle.

After two days of riding, the pioneer came to a wide gorge at the bottom of which was a winding river.

“I haven’t seen many rivers,” the pioneer said to himself and his ponies, “but of those I have seen, none of them have been red!” For this river’s water was a murky red-brown from the mud and silt that flowed through it.

The pioneer followed the river until he found a bridge. On the other side of the river was a town. He stopped at the local inn to feed his ponies, and he decided to go inside and get some food for himself. The pioneer was surprised to find that there was no one else in the inn except for the innkeeper.

“No one stays here anymore,” said the man as he wiped a glass dry with a filthy rag.

“Why not?” asked the pioneer.

The innkeeper sighed. “There’s a demon-possessed bull that rampages through town every day, destroying buildings and goring other animals. All of our wranglers have tried to stop it, but none have been able to calm it down.”

The pioneer was sad to see such a nice town laid to waste, and he was interested in seeing a demon-possessed beast. “I’d like to try to catch this villain,” he told the innkeeper confidently.

“I can see there’s no deterring a strong and energetic young man like yourself, but you should know that the bull can only be harmed if you break off its horns. Otherwise, even if you it kill it, it will come back from the dead twice as strong,” said the older gentleman.

The pioneer thanked him for his advice and went back out to his ponies, who were gleaming and lively after their dinner. He hitched them up and procured a heavy sledgehammer from the back of the wagon. Then he went to the field outside the town and waited for the demonic animal to arrive.

Just before sunset, a cloud of dust appeared on the horizon, and soon the pioneer saw his foe: It was an enormous longhorn, with blood red eyes and rippling muscle. It’s pelt was white dappled with burnt-orange patches, and its each horn was as long as a man’s wingspan. With a start, the pioneer noticed a glint of gold between the beast’s two horns: a hat made of solid gold. It was the famous relic he had been seeking! Now he knew not only had to defeat the beast; he had to snatch the prize from his head. The pioneer half-expected his ponies to buck and bolt at the gargantuan longhorn, but they trusted their master and pawed at the dust expectantly. Taking the sledgehammer in one hand and the reins in the other, the pioneer cried, “Yah!” and the wagon shot forward.

The two opponents thundered toward one another until they met, and at the last second, the pioneer pulled his ponies to feint left. As the wagon narrowly missed the charging longhorn, the pioneer leaned from his seat and swung the hammer at the razor-sharp horn. With a crack, the horn broke, leaving a splintered nub on longhorn’s head. Like jousting knights, the two pulled away from one another and turned around for a second engagement.

This time, the longhorn’s head tilted to one side, off-balance from the loss of his horn. The pioneer knew this was his chance to take the Golden Hat!

The wagon and longhorn charged closer and closer to one another, and this time, the beast was even angrier. He leveled his head, ready to maul the twin white ponies with his remaining horn.

The pioneer quickly snatched a lasso from under his seat and tossed it. It snaked around the horn and held fast! Using all of his strength, he pulled the longhorn alongside the wagon. Like a snake, he snatched the Golden Hat off of the longhorn’s head and placed it on his own. With only a half-second remaining before the bull could smash the wagon, the pioneer swung his hammer once again and snapped off the remaining horn. The longhorn lowed with fury, and the pioneer, his prize obtained, dropped the hammer and lashed the reins! “Go!” he urged.

The ponies shot forward, and the pioneer realized they were heading straight for the red river’s gorge! Behind them, the hornless longhorn pursued, its eyes rolling, mouth frothing. The pioneer did not turn the ponies from the gorge but let them run until the very last second. Then, he yanked sharply on the reins, pulling the ponies and the wagon in a steep U-turn at full speed. Miraculously, the wagon didn’t tip, but the longhorn, in its fury, did not have time to stop himself from flying off the edge of the gorge, where he fell into the raging river below.

The pioneer returned to his princess with the golden hat perched on his head, and he told her about his daring adventure. Impressed with his bravery and skill, she finally decided to marry him, and the Golden Hat brought the two of them glory for many years.

The story is based on the adventures of Yamato, a Japanese hero. In honor of Texas week, I decided to turn the original into a story about a Sooner versus a longhorn. In Yamato’s story, he is sent to find a Golden Apple in order to get a beautiful siren to love him. In my story, the pioneer is searching for a Golden Hat, which is the trophy in the Red River Rivalry. On the way, Yamato has to fight a demonic boar. The boar can only be harmed by the Sacred Sword, and only on his tail. I reflected this by making the pioneer have to break the longhorn’s horns before it could be defeated. In a later story, Yamato loses the Sacred Sword and finds it again nestled between the antlers of a stag. I alluded to that by having the pioneer find the Golden Hat between the horns of the longhorn. Finally, Yamato kills the boar by jumping onto it, cutting off its tail, and riding it off of a cliff (of course Yamato escapes the fall). I mirrored this by having the longhorn chase the pioneer to the gorge of the Red River. If you’ve ever driven I-35 South toward Dallas, you’ve driven over the gorge that I’m thinking of! The sharp U-turn that the pioneer pulls the wagon into is meant to allude to our own covered wagon that rides through the end zone after a touchdown and turns around sharply. In a way, the pioneer did score a “touchdown” by stealing the Golden Hat and carrying it all the way to the end of the “playing field.” At least, that’s the allusion I’m trying to invoke. I hope you enjoyed the story! Boomer!