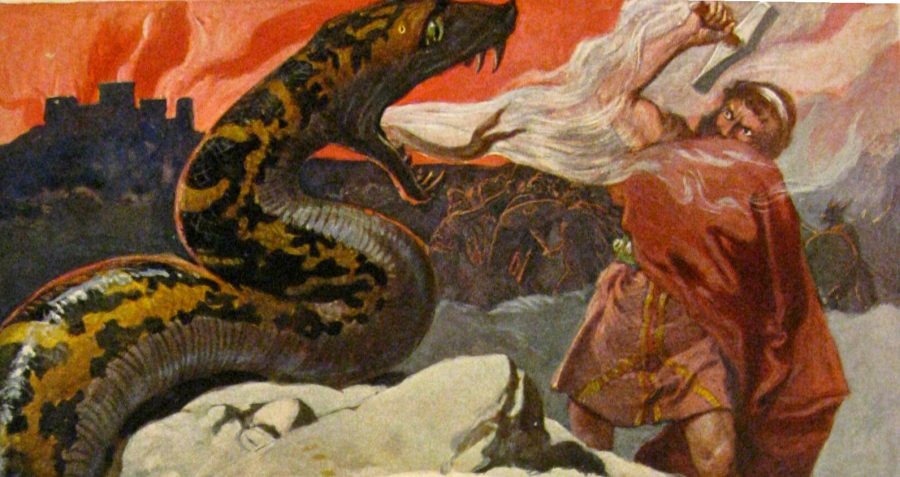 Several times this past year, in things I’ve read or watched, I’ve noticed a strange symbol of a snake eating its tail. Sometimes it’s depicted as two snakes, one dark and one light, and sometimes it looks like a knot, but it’s been popping up often. I mean, check out The Last Magician by Lisa Maxwell. It’s a wildly popular young adult novel, and its sequel released this week. The snake symbol is featured on the covers of both books.

I really wanted to find out more about this symbol, so I dove into Wikipedia and followed the trail!

The snake symbol is an ouroboros, and it’s a common image that comes from Ancient Egypt. It’s been connected to alchemy, Gnosticism, Norse mythology, dualism and other ancient religions/cults. The ouroboros is a symbol packed with many different meanings and variations, but the general idea is this: the snake eating its own tail symbolizes the infinite unity of the universe. The snake destroys itself, but it also gives birth to itself, an idea which has connected it to the Tao concept of yin and yang. When the snake is presented as half-dark, half-light, or as two snakes of different colors, the ouroboros represents dualities like life and death, birth and destruction.

Jormungandr is a representation of the ouroboros in Norse mythology. He is the World Serpent, the offspring of Loki and Angrboda. He’s so big that he can circle the entire world and grasp his tail in his mouth, and he lives at the bottom of the ocean. The mythology says that come the apocalypse, Ragnarok, he will let go of his tail and surface to poison the sea and sky of Earth. He’ll battle with Thor, and Thor will kill him, but Thor will only be able to walk nine steps before he dies of Jormungandr’s venom.

A kenning is a literary device that is usually two descriptive words hyphenated together to stand for a normal word. They’re used very often in Old English and Norse poetry, but we still use them today for effect or idiom. An example of a kenning from Beowulf is “whale-road” which just means the sea. A common way of describing a dragon is “fire-serpent.” A modern kenning that we use without thinking is bookworm.

Catherine is a Christian saint who is said to have been martyred at the hand of Roman emperor Maxentius, who persecuted Christians. She debated with the emperor’s best scholars and converted them to Christianity, so Maxentius had her tortured and imprisoned. Angels treated her wounds and she emerged from the dungeons more beautiful than ever. Many people visited her, and they were all converted to Christianity. Maxentius tried to have her executed on the breaking wheel, but when Catherine touched the wheel, it shattered. Eventually Maxentius had Catherine beheaded.